When applying for a guarantor loan, finding a guarantor can be tough – after all, it is quite a big responsibility for somebody to undertake on your behalf, and some people would rather not risk it.

No matter how unlikely the eventuality, they are agreeing to take on your repayments if you can’t afford them or are – for whatever reason – unable to make them.

However, there are many things you can do to make the process easier while applying for a guarantor loan, and to make sure that the people you are asking are aware of all of the facts before they make a decision either way.

As you can see in our guide to guarantor loan, your guarantor can be anybody over the age of 21 with a regular income that can afford to make your repayments should you not be able to.

However, it’s a good idea when finding a guarantor to make sure that it is somebody that trusts that you can make the repayments and that you have a good relationship with.

However, this isn’t a decision to take lightly. Finances and money are often a source of friction and tension in friendships and relationships, so be sure that you’re not risking something important, even if you don’t think that you’ll end up needing them to cover your repayments.

After thinking about all of that, write down a list of people who might be able to help and the order you’d like to ask them in. You could ask your parents first, followed by siblings or grandparents, followed by close friends or other relatives. But don’t put anyone under pressure.

Tip #2: Learn everything that’s involved with being a guarantor

After narrowing down your list, make sure that you learn everything there is to know about being a guarantor, about the small details involved and about the situations that might result in them repaying your debt.

Also, make sure you have a good idea of your own financial situation – money coming in, money coming out and any anticipated problems on the horizon.

When you ask your guarantor, it’s important to have a frank conversation about what it means to be a guarantor. They’ll probably ask lots of questions, and it’s important that you have all of the answers to put their mind at ease. Being in control, having all of the answers and having honest and accurate answers about your financial situation will mean that they’re a lot more comfortable with the idea.

Guarantor loans are all about trust – and it’s important to make your guarantor aware that they can trust you.

Tip #3: Having the conversation

When you’re going to ask whoever you choose to be your guarantor, bear in mind all of the things that we’ve already mentioned, but also bear in mind that what you’re asking is a big favour.
Although it might seem like a small risk to you – because you’re sure you can make the repayments – to them it might seem like a bigger risk. They will be putting a lot of faith in you to make the repayments, and if you’re unable to, it’s going to come out of their pocket.

Don’t pressure them, but perhaps point them towards our guide to everything they need to know about a guarantor and let them sit with the decision and mull it over for a while.

Finding a guarantor can be very awkward. If the person you asked says no, remember not to take it personally. It’s important they make that decision on their own without being made to feel uncomfortable or pressured. It’s not a reflection on you, or on how much they care for you at all, it’s simply that they don’t want to take the risk or can’t afford to.

There are always other people you can ask – and if you have all of the answers and follow the tips above, it’s much more likely that somebody will say yes. And, if not, there may well be other options – why not check out our guide to gathering together some cash for an emergency?

Here at Bamboo, we offer guarantor loans to help people with poor or no repayment history borrow money and begin to repair their credit score. Representative 49.7% APR. If you’re thinking of becoming a guarantor, but have a question that wasn’t answered here – or would like something explaining in a bit more detail – feel free to give us a call on 0330 159 6010. 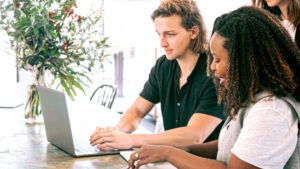 Ask Boo: Can I top-up an existing loan?