To many people, Instagram is a place where you upload a perfectly cropped, perfectly filtered, perfectly framed picture of your breakfast with a caption bursting with hashtags. To other people, however, it can be the source of money worries. And with Instagram debt on the rise, we thought we’d take a #nofilter peek behind the curtain of this social media giant to see how it’s leading people into debt.

A recent study found that the UK’s rising levels of debt and falling levels of savings can be attributed, at least in part, to our Instagram habits.

And while #avocado photos are a right of passage on the ‘gram, this isn’t another “millennials would have houses if they stopped eating avocado toast” situation.

Far from it, actually.

Instead, Instagram is a platform that allows (and actively encourages) three things to coexist happily, which all team up to create an overwhelming pressure to spend money and get ourselves into debt.

Those three things are:

Let’s break them down so we can get a clearer idea of how we’re now in a situation where we find Instagram debt on the rise around the world.

First up, the obvious: Instagram is a platform that’s almost entirely funded by money from advertising.

Owned by Facebook, it makes its money selling your data to advertisers so they can get their products in front of the ideal customers.

That means that, if you’re seeing an ad, a brand or company has paid money to get that ad in front of you because it believes you’re very likely to spend your money on their product.

In fact, here’s Mark Zuckerberg , testifying in front of Congress about security breaches in the wake of the Cambridge Analytica scandal, talking about how they make money:

On top of that, Instagram is now adding shopping features:

By reducing the barriers between liking a product in a photo and spending your money on that product, Instagram is deliberately making it easier for users to fall into the impulse purchase trap.

As Iona Bain, a journalist and founder of Young Money Blog, says:

“Tech companies are all working in an unholy and unhealthy alliance with each other to promote their own commercial interests. To imagine they will ever take significant steps to increase friction and to make it harder for people to make impulse purchases, that’s pure fantasy.”

And, as Professor of Marketing George John says in this video, there’s more going on than Instagram just trying to sell items through its app…

But selling data and ads to big brands isn’t the only way that the app is leading to Instagram debt on the rise.

The rise of influencers is one of Instagram’s biggest cultural influences. Whole swathes of celebrities have grown their careers exponentially by becoming influencers…

But that’s nothing new, really. Celebrities have always been paid to promote products.

But now it’s not just celebrities that are influencers.

Instagram has created a network of everyday influencers — people like you and me — that have grown large followings by posting glamorous versions of their everyday lives.

And these influencers are much more dangerous for our bank accounts than you might think.

While we know that we’ll never be a Kim Kardashian, seeing everyday people with great lives — even if, deep down, we know it’s not 100% real — gives us that “oh wow, my life could be like that” feeling.

But as Dr Alice Ashby, a psychiatrist in London, told Vice: “while perfect, photoshopped bodies and aspirational lifestyles used to be the preserve of supermodels in glossy magazines, now anyone can present an unrealistic image of themselves online.”

In fact, she went on to say that “Young people are under a huge amount of pressure about what they’re meant to look like. They might feel they have to have their hair done in a certain way and wear right labels, which can put pressure on finances.

And this pressure and debt, predominantly, affects women.

In fact, 39% of all young women in the UK say it is a struggle to make their cash last until the end of the month, compared to 27 percent of young men, according to a study by the Young Women’s Trust.

This, according to the Money and Mental Health Policy Institute, is a result of “People projecting the version of themselves they want to show to the world through spending.”

And this evidence isn’t just anecdotal. In the same Vice article, they interviewed a young woman named India who said that she often buys products that she sees on influencers feeds:

“I actually bought this long ASOS vintage-style dress I saw one of them wearing on Instagram. I would never have bought it if I hadn’t seen it on there, but it looked great on my friend and I messaged her and asked her where it came from.”

Is it any wonder that we’re seeing Instagram debt on the rise? As an app, it seems wholly geared towards making us part with our cash.

But things don’t stop there.

The Instagram influencer trend isn’t just causing people to buy items that they like for themselves, even if they can’t afford them, it’s also driving people to getting into massive amounts of debt to achieve the influencer lifestyle of constant travelling, designer clothes and fancy meals.

Here’s a fascinating video that tells the story of how Lisette Calveiro got herself $10,000 in debt in her attempts to become an Instagram influencer.

What can you do to avoid the Instagram debt trap?

Don’t get us wrong, we love scrolling through our feeds and taking photos of our lunches as much as everybody else, but it’s undeniable that Instagram can lead us down some dangerous roads towards money troubles (or worse).

As the anonymous mum of two told Hello! Magazine:

“I started My Frugal Year, an Instagram account that I hoped might help me to take control of my finances. I had some vague idea that my followers might shout at me if I spent too much, and I found poetry in using the platform that had, for so long, kept me spending, to help me dig myself out again.

In fact, My Frugal Year has three top tips for getting on top of your Instagram debt:

1) Arm yourself with the information. Unsquint your eyes at the cashpoint, check your credit score and audit your outgoings.

2) If you’re having a rough time financially, confide in someone. It’s the first step to ridding yourself of that unhelpful emotion, shame.

3) Make a plan. Download an app like Money Dashboard, or scribble it all down in a fancy-pants notebook.

(We love Tip #3, because we’re all about a good budget. Check out our blog for more tips on getting to grips with your spending!)

“When young people are engaging with influencers online, they are not engaging with people just like them. They are going into the online equivalent of a shop with a really pushy sales assistant. These are people that we think are like our friends, but they’re not. These are business people that want to make money. That sounds brutal, but that’s what I think.”

If you’re a little guilty of overspending on the ‘gram, check out the section of our blog dedicated to budgeting and tightening the purse strings a little. It’s full of articles that help you learn how to treat yourself without getting yourself into trouble!

This article about spending money on the go (and how to avoid impulse purchases) is a great place to start! 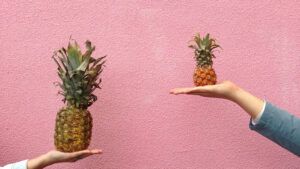 A top-up loan or a concurrent personal loan – which option is best?